Earlier this year, I had a ribcage injury involving a couple of my ribs. Thankfully, it wasn’t as serious as I thought it was going to be at first, but breathing and sleeping were pretty painful and difficult for the first couple of weeks especially and it took about six weeks for me to feel completely back to normal again.

The injury was accidental and occurred because of my own stupidity.

“Did anyone give you this injury? Push you? Hit you?”

They kept asking at the hospital, and I knew what they really wanted to know. I thought of everything I could say to reassure all of them. I live with a roommate. I don’t even have a boyfriend. There were people with me at the time the injury happened, I said. The last one I kept repeating to indicate I had witnesses who could vouch for my story.

It was all true.

But it was a very triggering day overall.

It reminded me of a time I’d been to the urgent care clinic during my relationship with my ex-boyfriend with a story prepared ahead of time about what happened to my jaw when I’d been asked almost exactly the same set of questions.

It happened during that messy grey area after I had found out about all of his secret lives and he had moved out of our apartment but I still needed to interact with him for a few months longer until our legal and financial obligations together ended completely.

On that morning, I’d woken up and my face felt as if a freight train had smashed into it. I peered into the mirror. The right side was bright red with a deep bluish tint under my cheekbone.

My phone was full of messages: “Last night I got out of hand, but you didn’t have to make me leave. If you were a good person, you would have let me stay. I was drunk and I drove home. I could have died. You don’t care about me.”

My head was pounding. I couldn’t even process what had happened the night before or think through the implications of the texts waiting for me right then. I had to think about what to do in the next few minutes. At work, we had a staff retreat. Someone from outside was coming in to guide us through some bonding exercises that would hopefully help us “gain a deeper understanding” of one another’s work styles then we would have a working lunch. I couldn’t miss work that day.

What was I going to tell everyone? I wanted to laugh at the absurdity. It was like a riddle that I had to solve: what was heavy enough to cause facial bruising this severe and could get close enough to the face, but wasn’t a fist? I couldn’t think straight.

I swallowed some Advil and pulled on clothes. On the Metro on the way to work, I finally came up with a story. As we filed into the conference room to start our activities, I could see people start to look at me, their eyes lingering a little too long. I tried to smile, but it wasn’t until I opened my mouth to speak, my first time that morning, that I realized I was going to have trouble doing so.

“You won’t believe what happened last night,” I said to my supervisor through gritted teeth and a pounding head that felt stuffed full of cotton. “I was in the lobby of my apartment building last night when I got home and this kid was twirling around in a circle with his book bag and accidentally hit me with it.” I pointed at my jaw. Did that sound stupid? Surely, she wouldn’t believe me. Then what would I do?

But she only shook her head hard and made a tsk sound in sympathy.

I tried to focus, but my jaw was throbbing. What I couldn’t understand was how he had punched me on the right side of my face which felt as if it was on fire and was where all the bruising was, but when I had tried to open my mouth, it was the left side that hammered with pain. Was my jaw out of alignment? Could that even happen?

By the afternoon, when the retreat ended, the pain was so severe that I had taken to not speaking at all and all I could think about was putting ice on it.

I decided to go to the Urgent Care Clinic. An x-ray verified it wasn’t broken. There was tissue damage and bone bruising. And I had a concussion. I went home and went to bed.

I woke up to several missed calls from him. I’d let him know earlier that I was going to the doctor. His tone had changed considerably to blaming me for “letting” him drive home drunk to concern over my injury and wanting to come and see me.

I never told anyone the details of this story. Or any of the stories like this one. Until now. It wasn’t the only time he ever did anything like that, although he preferred to do his damage in the shadows and create wounds in thoughts not flesh.

I kept the medical paperwork though and put it away carefully, so I would never forget that this had happened… to remind myself of what he was capable of doing. 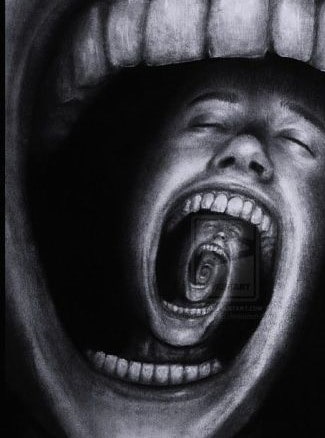 He had scraped raw everything inside me and dug down to the bottom. Where once I’d been loving, gentle and trusting, he’d scooped all that out and trounced on it. He’d turned me wild or dead inside. Every method at his disposal he used to create a climate of fear, humiliation, and despair, and I’d been afraid to tell anyone about how bad it really was.

And yet he’d told everyone I was the horrible one.

Things were always upside down somehow. Lies were truth. Love was betrayal. Blame was twisted onto me for expecting basic dignity and respect, while my very act of living and thinking independently of him was framed as disrespect. He always maintained control, yet he found a way to make himself the victim.

As in– his ex was “crazy,” a stalker, who wanted to use him for things. And then there was that other one who abused him. And they were all cheaters and “whores” who took him for granted. And yet they were all oh-so-obsessed with him.

Then suddenly it was me.

Sitting in an urgent care clinic alone with a concussion telling made-up stories about how I got it, while he gleefully let everyone believe I was awful, knowing all he’d done. Upside down.

Yes, he scoops out everything good. And he pours himself in just so he can see his own reflection. The cheater. The abuser.

Ah, the lies we tell on their behalf…

And, ah, the lies they tell on ours.

Please note that it may take a couple of hours to get the subscription verification E-mail.