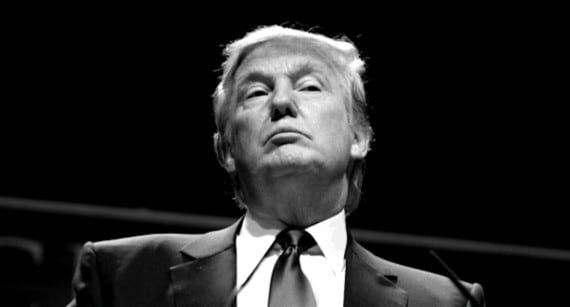 “This was the largest audience to ever witness an inauguration — period — both in person and around the globe.” -Sean Spicer, Press briefing, January 21, 2017

I was lounging around on my couch in the living room that Saturday night, exhausted after a long, strange weekend in the District, where the one-two punch of Donald Trump’s chaotic inauguration followed by the record-breaking Women’s March had brought the city to a point of fatigue and uncertainty.  The news was on and I, like a lot of the rest of the country at that time, could not stop watching it.

It was Sean Spicer’s first press briefing, and chills went down my spine as I heard those words. I sat up. For no reason I could explain, my heart was suddenly thudding in my chest and blood was rushing into my head. My eyes laser-focused on the screen as he continued to speak, but I couldn’t understand why I was feeling so anxious all of a sudden.

Spicer made several statements to try to back up his conclusion. He discussed ridership numbers on the Metro, the use of whiteboards in past inaugurations to protect the grass, and whether the news media had provided crowd estimates. They were all facts that were either true or they weren’t. We could all look them up and come to the same indisputable conclusions.

Yet I had heard most of these discussed on the news already and they didn’t support Spicer’s conclusion.

My breath was continuing to quicken as he spoke and I felt my throat tighten.

This was the largest audience to ever witness an inauguration–period.

This was a subtle but hostile act of erasure with which I was very familiar and from which I was still very much digging myself back out and now it was happening again.

Something told me to check his list of Instagram followers. Maybe because he was always commenting on mine.  Something was off.  I could feel it, but I couldn’t put my finger on what.

I clicked the button to open his list of followers and right at the top, her picture appeared. I took a screenshot and texted it to him: “What is this?”

Immediately, the text came back from him: “I didn’t add her.”

“What do you mean you didn’t add her? You unblocked her and added her.  How else is she there?”

Confused, I checked his list again and she was gone.

“She was just there. Didn’t you see what I sent you? You must have re-blocked her.”

“It must have been an Instagram glitch.  I don’t know what to tell you.”

For six hours, he proceeded to try to tell me that he didn’t know how she had ended up on his list of followers, that he had nothing to do with it.

During that time, I kept opening the screenshot I had taken just to make sure I hadn’t been wrong. If I hadn’t taken it, I would have started to doubt that I had seen her picture there at all.

But I wasn’t wrong. I had the evidence right there in front of me. Didn’t I? Didn’t I?  Then he got angry and accused me of not trusting him.

So I had to be fair and stop to ask myself if it was possible that he was telling the truth and it really had been an Instagram glitch.  Was I wrong not to trust him?  What if it really had been a glitch and I was refusing to believe him?  Then I would be the one who was wrong for not giving him the benefit of the doubt.

But I just couldn’t buy that story.  It was too much of a coincidence for me to believe him and the way he had reacted when I’d told him had not been the way someone would react if it had been a glitch and I had to go with my intuition on it.

But I couldn’t believe it.  He would rather lie to me in that manner than just tell me the truth?  I was shaken by that fact and let him know that I didn’t think I could be with someone who would do such a thing.

His message came back, immediate once again.  “Okay, I added her.  I’m sorry, but I wasn’t thinking that it could hurt our relationship that bad. I’m really sorry. I wasn’t thinking right.  I love you and I didn’t mean to hurt you.  Why would I hurt you if I’m madly in love with you? I spend five nights a week with you. I spend more time with you than my family or my friends because you make me happy. You complete me. If I knew it would hurt you, I swear on my life I wouldn’t have added her and I wouldn’t have lied.  I love you. I can’t even think about one moment without you in my life.”

From one tactic to another.

What about the times I didn’t have a screenshot?

I didn’t say that.  You heard me wrong.

My GPS is wrong.  I was at work the whole time.

I just talked to her because I missed you and I was lonely and didn’t have anyone to talk to.

[x] is lying.  He likes you and just wants to come between us.

I have to pretend like I’m happy because that’s what everyone expects.

You always have to try to prove me wrong, don’t you?  You never trust me.

Her number is saved in my phone because I had to block it.

You’re reading too much into this.  You over-analyze everything.  You think too much.

Everyone knows I’m not going to marry her.

Stop asking me if I really love you.  If you can’t see it, then nothing I do is ever good enough for you.

I didn’t say that about you.  Do you think I’d disrespect you like that?

That’s not even cheating.

I was giving all of myself and my love to you.  Don’t tell me I wasn’t.

I just tell her what she wants to hear.

You’re the only one I love.  I’ve never felt this way about anyone else.

I’m just doing this because my family wants me to.

That’s just a girl I went to high school with.

[x] is lying.  She is jealous of us and wants to come between us.

She’s obsessed with me and won’t leave me alone.

Trevor Noah, a comedian from South Africa, has an interesting take on the deflection that he’s observed when it comes to racism that’s relevant to the discussion:  “…[S]omeone can get more offended at you calling them a racist than the fact that they are a racist.  That’s become a new thing I’ve stumbled across. People go, ‘How dare you call me a racist?’ Well, how dare you be racist?”

I couldn’t have explained it any better.  Welcome to the narcissist’s funhouse.  When you attempt to stand them in front of any standard mirror and call them out on their behavior, they lash out:  How dare you be offended by what I did and try to talk to me about it?  Soon all the mirrors are distorted and you’re living in the funhouse too.

Make no mistake– these attempts to re-write what happened are a war on reality.  Narcissists must have control of all of its versions and they usually have no intention of letting the truth of what they’ve done be any part of it unless they believe it will serve them in some way.

Gaslighting is not a new concept.  It’s a specific form of manipulation, wherein an individual denies, provides conflicting information, or outright lies over and over again so that another person begins to doubt their own perception of reality.  The term comes from a 1944 movie where a man purposely tries to drive his wife insane by making the gaslights flicker, then telling her that she is imagining it when she points it out.  It’s a brainwashing tactic to which anyone can be susceptible.

It’s easy to let small things go at first, especially when someone pits their memory against yours and there’s no proof, but over a long period of time after being subjected to multiple forms of gaslighting, victims start to feel constantly confused about trusting their own judgment.  They may challenge the person less because it just results in more lies and even threats and retaliation and so they shut down and withdraw.  Or they may persist in challenging the person until their persistence is used by the narcissist to paint the victim as unstable.  The ultimate goal?  Narcissists want to wear down their victims in order to have control over them.  If you can control how a person sees the world, you can control that person.

That night in January, as the news briefing ended and the political pundits began to discuss it, they looked as stunned as I felt.

I was shaking. This was an old feeling, but not a friendly one.  I was so attuned to it at that point, that when it happened to me, I could feel it even in my joints.  When you know something is true and you’re being told a lie, something inside you feels personally mismatched and your brain screams for them to align.

I knew well what it was to walk with a jagged, disjointed reality and try to function in the world. As I watched first Sean Spicer and then the new President in clips from a speech he gave earlier that same day to the Central Intelligence Agency, I knew I was having an emotional flashback to the feeling of helplessness and anxiety that comes when someone tries to distort your reality.   “I get this network, and it showed an empty field,” Trump said. “And it said we drew 250,000 people. Now, that’s not bad, but it’s a lie… So we caught them, and we caught them in a beauty. And I think they’re going to pay a big price.”

And I think they’re going to pay a big price.

I know the kinds of prices that people who want to distort your reality make you pay when you refuse to comply.

The bad thing about having a leader who gaslights is that you can’t walk out or escape it.  It’s on the television in your apartment lobby.  It’s in your news feed on Facebook. Sleep didn’t come easily for a while.

Yet, mercifully, over time, the way that the larger world had mirrored my smaller world began to change and the re-traumatization began to lessen each time I heard a new set of lies. I was buoyed and intrigued when I realized that it was because there were too many of us sharing the same reality for the effects of the gaslighting coming from the White House to set in for me. Real-world grounding by mass media refutations and personal discussions in which we could triangulate each other’s experiences broke the spell.

People in relationships with narcissists aren’t that lucky. The entire world around the narcissist bends over backward to accept and defend his or her narrative, due to careful impression management by the narcissist and often by finger-pointing at the very person who is being gaslighted.

A version of this article appeared on Elephant Journal, “How I Was Gaslighted By the President of the United States.”