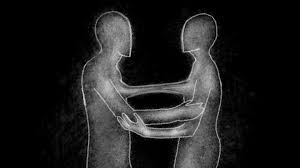 Is my boyfriend a narcissist? I just couldn’t decide, even though a part of me already knew.

There comes a time in the recovery process when you have to face all those things that the narcissist did that you didn’t want to face during the relationship.

The things you only heard about in whispers or learned accidentally.  The stories you could only corroborate with one source.  The things that seemingly crawled straight out of your own imagination, gristly and wet, as if the narcissist knew exactly how to reach into your own heart of darkness and pull out your deepest fears.

They are the things you can accept only in stops and starts once the narcissist is gone from your life and you can then turn each piece of the relationship over in retrospect and without his influence.

Yes, he probably did say that you were a whore and didn’t mean anything to him.

Yes, he probably did say that he was using you for money.

Yes, he probably did have Skype sex with another girl in your own apartment while you were in the next room.

Yes, he probably did sleep with other women he met while you were on vacation together.

Yes, he probably has slept with multiple women since getting married.

Yes, he probably did sleep with one of your best friends.

When you’re with a narcissist, you get split in two.

Is My Boyfriend a Narcissist?

Here I am years later, putting each of these fragments in its separate and proper place, so I can become whole again.

In each of our stories as survivors, the exact details of how the drama plays out when trying to clarify these incidents and how each event rises and falls in importance during the relationship script and then absorbs itself into the overall narrative are familiar to anyone who has been through a relationship like this one.

We all get thrust into our own horror movie we can’t shut off, even if the storyline varies.  There is nothing the narcissist won’t do, no line they won’t cross in trying to gaslight you.

Your worst nightmare becomes the dream from which you cannot wake up.  It is panic-inducing.  It is mind-numbing.  It is crazy-making.

The splitting happens when a choice has to be made.

First, notes are compared, souls are bared, casual conversations are had in passing with people you have been kept away from.

The other participants in the conversation likely are not even aware of which revelations would be such daggers.

Indeed, some of the things I learned merely confirmed suspicions and dropped unceremoniously into what was already a black hole of obliterating betrayal.

And yet some of the things I heard, such as those above, would have ripped that hole open so wide I was afraid I would never be able to close it.  So the horror show begins.

Second, you confront the narcissist.  The stories will haunt you and the words from the conversations with others will be the only proof the events ever took place.

Your voice will shake and your heart will pound as you ask for the truth, but the responses you get are prophesied:

“I didn’t do that. Think about it.  He always liked you and he’s trying to make you think bad things about me.”

“Fine, believe her over me.  But you know she hates you.  She’s jealous of us.”

“Do you think I’d disrespect you like that?  Then why am I still here?”

Finally, you make the choice.  Except, it’s never really a choice.

From the moment you learned of the new and devastating betrayal from the lips of the person who told you, it has led you to this inevitable moment, the emergence of the double self.

You believe the narcissist.  And yet you don’t. [Read 7 Narcissist Lies That Are Easy to Spot]

The double self has many purposes and helps you in many ways, but in this capacity, it helps you protect yourself.  It helps you answer the question, “Is my boyfriend a narcissist?”

It helps you preserve your view of the world, letting it dissolve slowly rather than be ripped away until you have something to safely put in its place.

Something you will not have until you escape from the relationship.